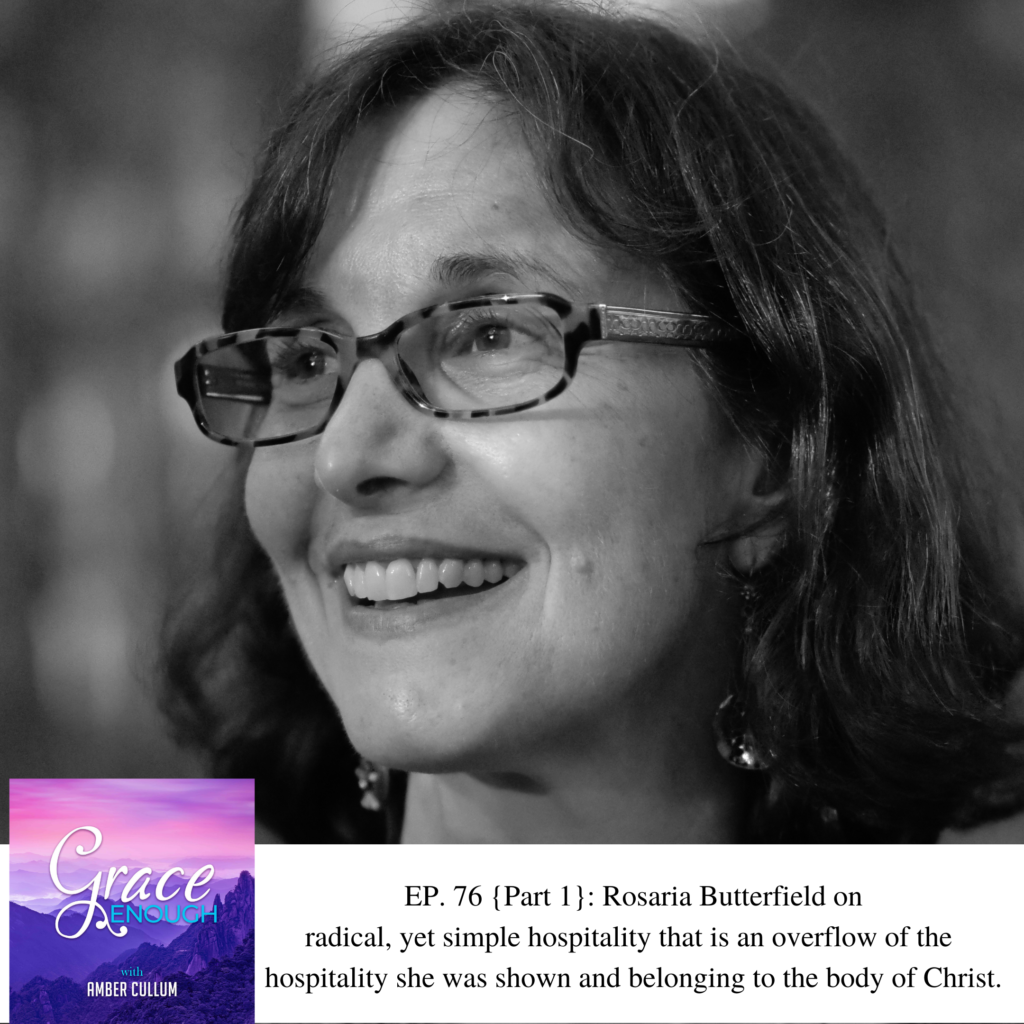 Rosaria Champagne Butterfield, a former tenured professor of English and women’s studies at Syracuse University, converted to Christ in 1999 in what she describes as a train wreck. Her memoir The Secret Thoughts of an Unlikely Convert chronicles that difficult journey.

Rosaria is married to Kent, a Reformed Presbyterian pastor in North Carolina, and is a homeschool mother, author, and speaker.

Rosaria and I chat about her conversion, experiencing Christian hospitality as a lesbian professor, how her family practices hospitality, and how hospitality and the gospel go hand in hand for her.

6:42 For those who aren’t familiar with your books and your story, briefly share with our listeners how you came to know Jesus

“The Lord saved me 21 years ago, and at that point, I was living in serially monogamous lesbian relationships. I was a tenured professor at Syracuse University in English and women’s studies, and was the co author of our domestic partnership policy, which was the forerunner for… gay marriage, both the Obergefell decision and prior to that all the little state ones. I’ve always had a burning desire to be a truth teller and to understand the truth. I had a sticker on my desk that said, ‘I’d rather be wrong on an important point than right on a trivial one.’

I just really wanted to know why Christians hated people like me and why they just wouldn’t leave consenting adults alone. So after my 10 year book was written, I started working on a book on the religious right. And in the process of that met a pastor, who was also one of my neighbors name is Ken Smith. He and his wife Floy and I became friends. And they entered my world, I entered their world….So there has this Christian world and their hospitality and my gay world and my hospitality and it had enough of a familiar sense that it was not terrifying to walk into that world and that fact that they were willing to walk into mine. Well, it was that that really allowed them to put the hand of this stranger called Rosaria into the hand of our Savior, the Lord Jesus Christ.”

9:51 Hospitality is woven through your story from your years in the LGBTQ community to being welcomed in to Ken and Floy’s home to eat and to dialogue with a couple who had vastly different beliefs than you to how you interact with your current neighborhood. How did previous models of hospitality help shape your families current model?

“What we were practicing the Bible wouldn’t necessarily call hospitality because that has a particular Christian grounding to it. What we were practicing was a kind of liberal communitarianism. We wanted to create a community that was bound by certain values and was willing to show up in hard places. The gospel is more than that. The gospel is that. But if the gospel isn’t more than that, then it’s not the gospel. Because what hospitality is, is it’s welcoming a stranger to be part of  your neighbor connection and then by God’s grace, watching neighbors, come to Christ and become part of your family….there’s a there’s a difference between liberal communitarianism and hospitality.”

“What I do say about my conversion is I lost everything but the dog…But that was God’s blessing. But here’s what I had before I lost everything, I had this amazing Christian community. I had people who had already welcomed me into their homes and their lives. So it was frightening but it was not lonely. If that makes sense.”

16:00 So what are some of the ways now that you practice this hospitality that was practiced to you?

“We don’t believe that the church is meant to limp along in a lonely way.”

“We have an open dinner table.”

Hospitality Comes With A House Key

“At the end of dinner, the kids would clear the dinner dishes and send Bibles and seltzers down the long row along with coffee cups and then, we will have devotions…Kent will read a chapter of the Bible, and we will discuss it. And then he will ask for prayer requests, and then anyone who wants to can pray.”

“This is not some kind of a show for the neighbors. Kent and I have been doing that [dinner and devotions] from…19 years ago yesterday. We’ve been practicing family devotions, whether it’s just us or whether it’s us and the kids or whether it’s us and the neighborhood. We’re not different in front of different people, but what we try to communicate is that we believe that Jesus is real and living and hears our prayers, and we need Him to intervene in this situation.”

“We can prioritize the immediate well being of people and this becomes an amazing gospel witness too, because we are living in a situation where six out of seven continents are literally hearing God roar into their lives and destroying their idols and everyone you meet is in an existential crisis.”

25:53 You’ve been in your neighborhood for a long time now, but let’s go back to the beginning. Would you be outside and strike up conversations? Did you start putting fliers in mailboxes? Tell us a little bit about that.

The Art of Neighboring by Dave Runyon

“But be sure to know that at a certain point you need to gather people and shift it to prayer and Bible.”

“People don’t catch the gospel by osmosis. They’re not going to just rub elbows…have it. So this is the other very important thing about hospitality. You have to embrace the awkward, okay? If it’s awkward, you’re probably doing something right.”

“Awkward is not bad. Awkward is a great sign that you have just now inserted something really strange and unusual. It’s going to take people a little off their game. Hallelujah. Praise the Lord. Let’s all get off our game.”

“If you think you’re having your your morning devotions for just you, you’re not thinking right.”

“There are people who could not find the throne of grace if it hits them in the head and you need to bring them there in your prayers and your Bible reading. Bible reading is not a negligible thing.”

“Don’t think that there’s any such thing as a lone ranger Christian. If you are not a Christian submitted to a faithful Church and a faithful pastor and elders, Satan will deceive you.”

Invite people to help by borrowing items from them.  That helps people feel needed and welcomed.

“So guess what we respect and appreciate religious boundaries….We don’t expect you to be like us. This is not a cultural Christian
program. We believe that everyone is made in the image of God.”