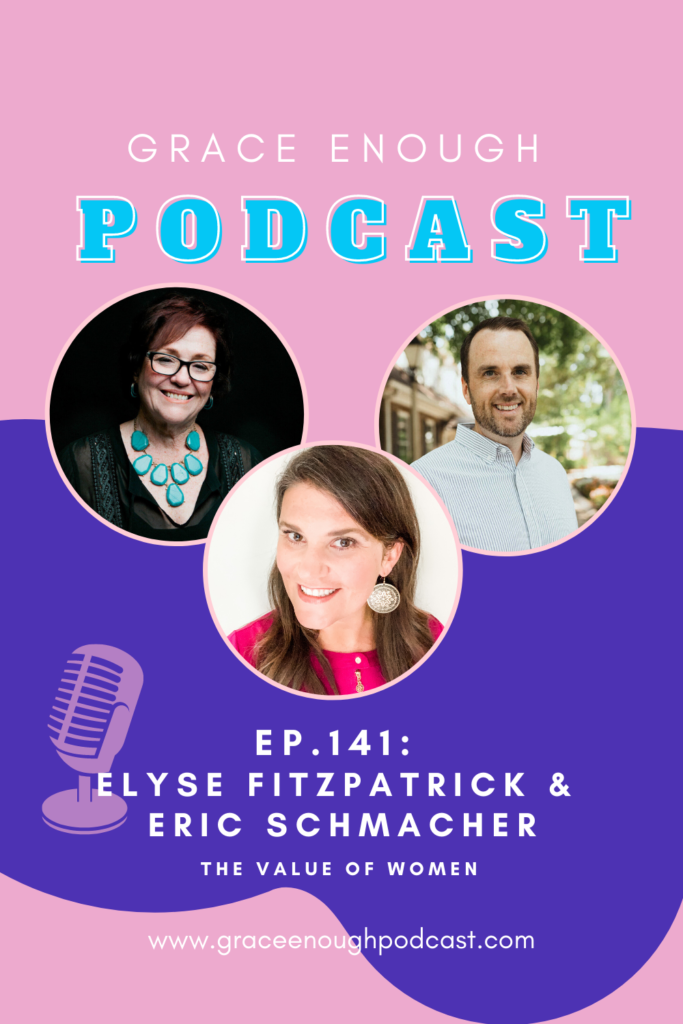 Elyse Fitzpatrick is a nationally sought-after speaker and author, speaking at the Gospel Coalition’s conference and Nancy DeMoss Wolgemuth’s Revive Our Hearts. She holds a certificate in biblical counseling and has an MA in biblical counseling from Trinity Theological Seminary. She has authored 23 books and lives in California with her husband, Phil.

Eric Schumacher is a pastor, songwriter, and author. He earned an MDiv in Biblical and Theological Studies from The Southern Baptist Theological Seminary. Eric and his wife, Jenny, have five children and live in Iowa.

Elyse Fitzpatrick and Eric Schumacher join Amber to discuss the worth and value of women displayed in the Scripture and how the evangelical church has often missed the mark in how it views men and women and their partnership in God’s work.

Shepherding women in the local church

Eric: “We received nothing in seminary, about how to shepherd women and about women in the church other than doctrine on what they couldn’t do.”

Eric: “From cover to cover, the Bible is a story about how God has planned to display His glory on earth through men and women together. That has really influenced my view as a pastor of saying, what does it look like for men and women to be partners together in God’s work.”

Why a book about the worth of women?

Elyse: “Women’s value is not being an appendage of a man, but rather the bride of Christ. That’s where our identity needs to be found.”

Eric: “The original cultural mandate given in Genesis 1 where it says male and female He created them, in the image of God He created them, and they were to be fruitful, and multiply, fill the earth and subdue it and exercise dominion. That great commission in Genesis 1 gives way to another great commission in Matthew 28 and no longer is the focus on having children. Why? Because the promised child is born….Once the child is there, we’re now focused on filling the earth with disciples, and teaching them to obey everything that child has commanded. That’s what it means to exercise dominion is to live under His rule.”

Eric: “Genesis 2 is so often missed and abused…. It’s not good for the man to be alone….That passage gets taught, and, and then it’s like, men now see how valuable she is, she needs to be protected by you and she needs to be led by you, [but] the whole focus of that passage is you need her, and you can’t accomplish God’s purposes, without her. And when it comes to partnering with her, he leaves his father and his mother, he sacrifices his safety, his comfort, his family, his everything, to be united with her.”

Does the Old Testament devalue women?

Elyse: “If we’re going to read the Old Testament case law, we need to not read it as 21st century women.”

Eric: “Jesus says, the whole law can be summarized in two commands, Love the Lord your God, love your neighbor as yourself. Which means we have to go to every one of those commands about women that we think devalue them and are unkind or lead to their abuse and ask the question, how, in that context, is this loving to my neighbor.”

Eric: “If Jesus is not a misogynist, then the law can’t be misogynistic. Otherwise Jesus doesn’t fulfill it.”

Paul and his view of women

Elyse: “Paul is not a woman hater. When you begin to really look at his ministry, and the people that he expresses thanks to and for at the end of the book of Romans, I think it’s something like 10 of the 29 people listed… are women.”

Elyse: “Paul talks over and over again about how Priscilla  knew Scripture so well that she would teach Apollos.”

Eric: “Reading Paul is just like reading the Old Covenant law. You can start from a certain place and make him look awful, but context is king and reading him as a whole is really important.”

Eric: “Why does Paul say, I wish everyone was single?…Because the child’s been born and the seed has come. And if you’re single, you can now devote yourself full time to making disciples instead of making and raising babies….I value kids, and I value marriage, and it’s an absolutely good thing, but we build our churches around marriage, sometimes, almost more than we build it around the Great Commission, and we’re missing something huge there.”

Hope for readers of Worthy

Elyse: “All Christians are both sons and brides.”

Eric:  “Jesus said that the Holy Spirit will come and give you power to be my witnesses. Women are already in and they’re already empowered. What we as the church, and so often men need to do is to stop grieving the spirit, and hindering Christ by putting up stumbling blocks and closing doors, and making it really difficult for women to do what they’re already commanded and empowered to do.” 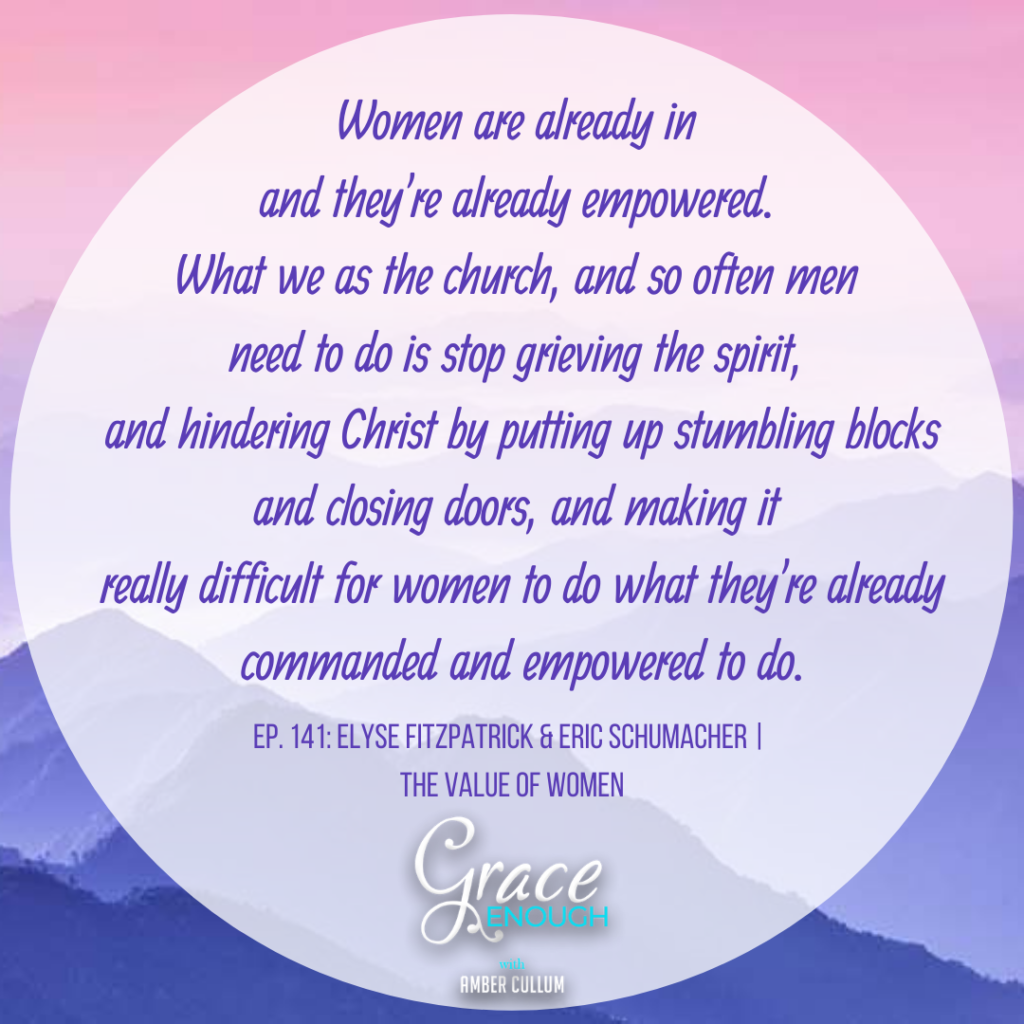 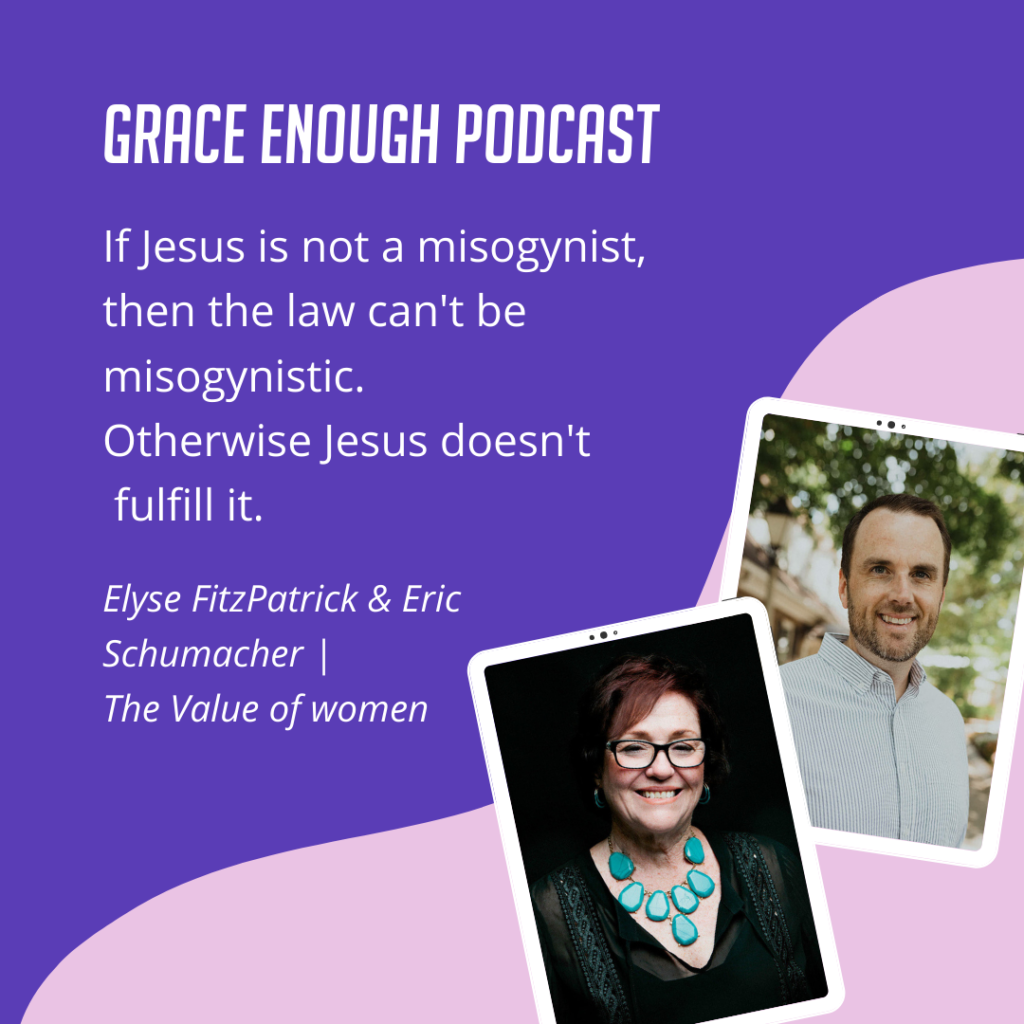